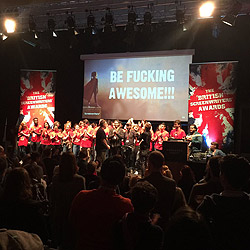 I’ve just had three days of meeting other creatives, mainly writers (which in itself is a weird and exhilarating experience, because in no other situation will you be able to speak freely about yourself, your thoughts and ideas, what you’re working on, get really excited about it as you’re speaking, and have the other person get excited too, instead of looking at you like you’re an alien about to blast their head off!) but also producers, exchanging ideas, pitching (scary! — but less so now that I’ve done it a few times!), as well as listening to very seasoned speakers such as Pilar Alessandra and Linda Aronson, which was amazingly inspiring, and finally, I got to watch ‘Die Hard’ on a big screen while writer Jeb Stuart was commenting LIVE from ON STAGE (that in itself was awesome enough to make this weekend one of the highlights on 2017!)

An informal chat with one speaker after his particular session left me with the morbidly optimistic motto: “Life is meaningless, but it’s meaningless that it’s meaningless” (I’m choosing to take that to heart rather than his personal advice of combating my “so-called bipolarism” by quitting coffee and replacing it with meditation. It’s always a pick and mix with these things…)

It’s been one hectic weekend and I’ve come out on the other end, winded, inspired and dented (figuratively as well as literally), with a thick wad of business cards and several ideas for my current writing projects and a couple of brand new ones. 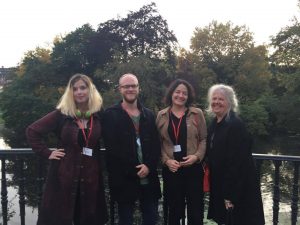 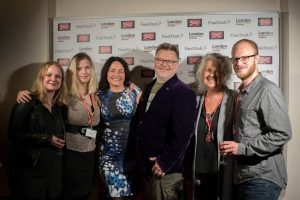