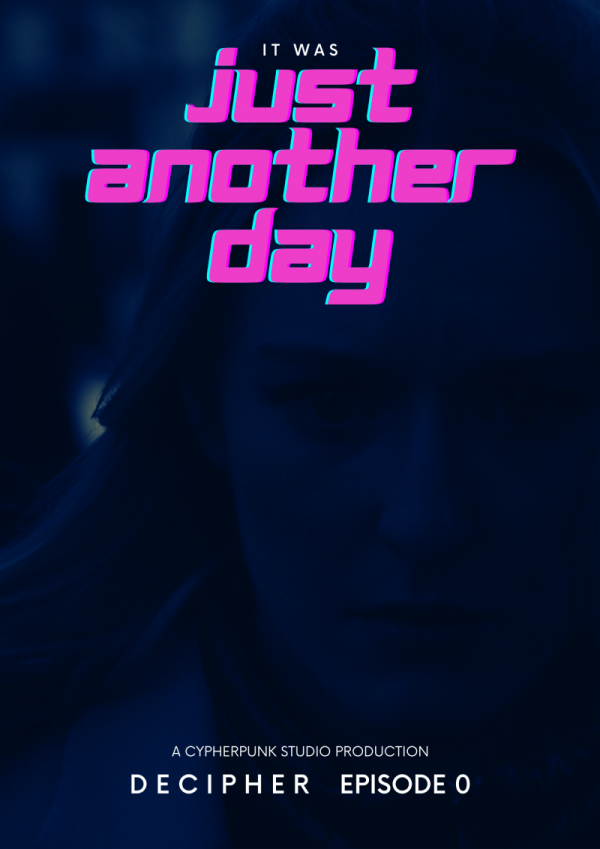 My work life balance is slightly off at the moment, with so many exciting projects in the Cypherverse pipeline. All the development and pre-production work on the first season of ‘Decipher’ is now – finally – coming together, and I’m just itching to share the amazing progress being made on each, vastly different episode. But obviously, I can’t.

And of course that is even truer for the next two original shows that we’re creating, that are currently in the very, very early stages of development. I’m obviously even more excited about those (and itching to shout about them from the rooftops even more) because the early development stage when the ideas are still flowing and you’re still constructing worlds, birthing characters and weaving storylines is the always the best stage of the process, at least for me; that’s when the bipolar brain is actually useful for once and can be allowed to run amok!

But in terms of ‘Decipher’, it’s not much longer now until you’ll be able to get a taste of the show. We’re in the later stages of post-production on the minisode ‘Just Another Day’ – which is a short prequel to episode 1, but also serves as a freeview that comes with the beta version of the app at the end of the summer, allowing you to try out the interactive mechanism and get a better idea of the concept, before the premiere of the show in the autumn. So it’s more of concept film, but it does have a narrative albeit a simple one (at least compared to the full length episodes.)

We just need to “show, not tell” our future audience about our interactive concept, because when we try to explain it, people automatically assume we’re trying to recreate Black Mirror: Bandersnatch, and that’s the last thing we want to do. I was extremely excited about Bandersnatch when it came out, and then extremely disappointed after having played it for a day. Because the story in that film ultimately didn’t make any sense and the reason it didn’t was because they put the ‘choose your own narrative’ interactivity before story. The whole idea behind ‘Decipher’ is that story always comes first. We want to use gaming technologies to enhance the story, not distract from it.

And for me personally, as creative director of this show, I wanted to take the opportunity and explore how this technology can be used to take subjective storytelling and the ‘unreliable narrator’ to the next level; with the interactive experience the audience has the power to dig deeper into the stories by interacting with selective scenes and the choice of if and when to interact will determine how much and what side of the story they unveil, but it won’t affect the “objective truth” of events. There will be no contradicting alternative versions of the same reality, no alternative endings that contradict each other’s pasts, but unveiling hidden or extended scenes will definitiely affect your subjective perception of events and ultimately change how you see the story by the end.

One of the future shows that I am developing is a traditional ‘choose your own narrative’ (most likely) though, but that is a YA adventure sci-fi show, and that type of interactive structure works a lot better for that genre and especially for that demographic (under 15s) and I am super excited about it. Some of the references I have for the story and style of the show is Inside out, Soul and Coraline, just to give you an idea.

(And if you haven’t seen them, you should. Especially Soul and Inside out. They might be explaining highly complex themes in a child-friendly manner, but don’t dismiss the films as “children’s movies” and miss out on the epic experience of watching them. Trust me.)

Oh, there is one piece of news unrelated to Cypherpunk Studio. My experimental poetry film “A void.” (starring Blomma in his breakthrough role) got selected to its first film festival. Diametrale Experimental Film Festival. So that’s exciting.