COMING OUT (Disclosing your mental illness diagnosis – Part One) 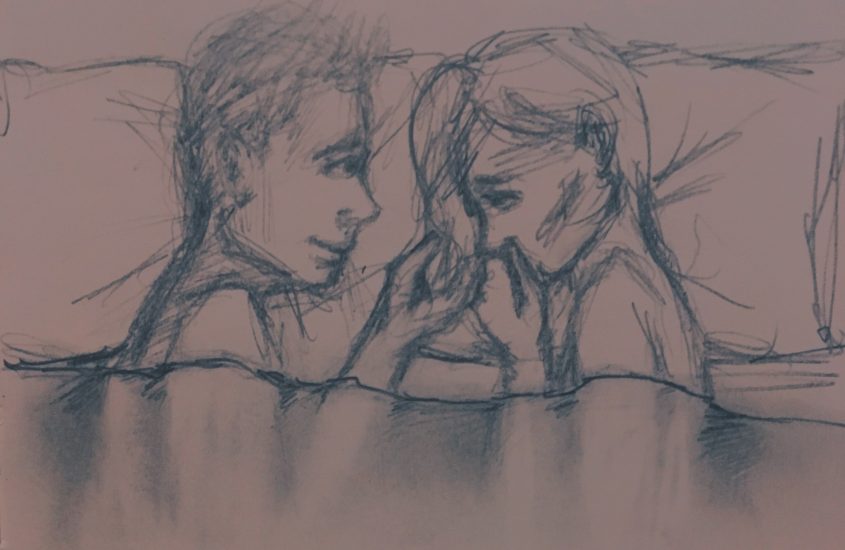 Before I met my partner, whenever I went on a date I used to blurt out that I’m bipolar as a throw away comment or self-deprecating joke, usually mid-monologue, within minutes of meeting the person. I always told myself that I did this because it was the best way to kill the stigma around the disorder — you know, full disclosure, cool and casual.

When I tentatively began dating again at the age of twenty-nine, a friend and former flatmate of mine in Stockholm half-jokingly gave me some basic rules for a first date, a simple list of three topics that she told me were off limits on a first date, and they were:

I suppose the joke is that I always went into every first date with the serious intention of actually following these rules and always, without exception, unintentionally broke them. Every single one of them.

But then I met my partner and he was different, what I felt for him was different, and suddenly I changed my MO — not consciously — it wasn’t until I got home from my first date with him that I realised I’d never made a joke about being bipolar, in fact I hadn’t mentioned it at all. When I went on the second date with him, I had every intention of telling him and get it over with, but I actually found myself struggling to get the words out. So, again, I went home with what by this point felt like a big secret.

This made me realise that routinely revealing that I have bipolar disorder with an off-handed comment five minutes in to a first date, was less about reducing the stigma around it and more about subconsciously protecting myself from rejection and hurt.

When you’re bipolar, it’s very common to meet people, whether they’re new friends or romantic partners, whilst you’re up. Because this is when we’re at your most exciteable, inspired, productive and, most importantly, social. So this is the version of us that the other person gets to know and, sometimes, fall in love with.

Then our mood swings, and they have to get to know a whole new side of us — a  version of us that can seem like a whole other person sometimes — and figure out the relationship basics, such as communication and intimacy, all over again, which can be confusing to say the least. But remember, we also have to figure these things out, whilst dealing with our symptoms and the anxiety about how the symptoms are going to affect the relationship, at the same time.

This is why it helps to be self-aware and really know ourselves, our moods and our symptoms, because that way we’re better prepared for the storms when they come, which makes it easier for us to ride them out, but it also makes it easier to have the conversation with our friends and partners ahead of time and prepare them for what the storms can be like for us, so that they have a better idea of what to expect and how best to support us.

I met my partner at the end of February, just as I was heading into a hypomanic episode and the connection turned crush turned infatuation that I experienced throughout the first date, sped up that hypomania, so the person that my partner met and subsequently got to know as we continued dating, was the hypomanic version of me, a version that persisted because the year I met my partner I was more or less hypomanic for six months straight.

Then, as the summer started to come to an end, I knew I was likely to get low soon and, knowing my tendency to isolate myself and actively push people away during depressive episodes and not wanting this happen with this person in case that would ruin the relationship, I knew I had to warn him beforehand that this might happen.

There was a lot more I could have told him, other symptoms to look out for, but because the relationship was still in the early stages and I was worried I might scare him away, I only told him the bare minimum. In hindsight, I wish I would have been been brave enough to give him full disclosure, because I believe it would have been easier on both of us if he hadn’t been thrown head-first into a situation where he was discovering these things as they were happening and having to figure out how best to support me at the same time.

When I finally managed to bring myself to tell my partner that I have bipolar disorder, we were three weeks into the relationship and by then, the stakes had sky-rocketed for me, for two reasons: having waited so long to bring the subject up automatically turned the quirky personlity trait of previous first dates into a an actual Big Deal (which in hindsight was a good thing, because having bipolar is a big deal and needs to be taken seriously, both by by the people in my life and myself) and also, by this point I’d developed feelings for the guy, so if the revelation that I’m bipolar were to scare him off, I would definitely have my heart broken.

At the time, I was kicking myself for having put myself in this vulnerable position and was wishing I could go back in time, back to that first date and blurt it out somewhere between hello and I just finished writing this screenplay. But as it turns out, because the revelation started with ’I want to tell you something’, the conversation that followed was decidedly serious, no matter how many self-deprecating jokes I tried to fling into it, and my partner listened and reacted accordingly — with calm and respect — and the first thing he asked me after I finished talking, was had I been nervous about telling him and, when I admitted that I had and still was, he thanked me for trusting him.

I’ve been thinking about that moment a lot. Although it hadn’t occurred to me before, when he said this I realised that he was right. I had trusted him in a way that I hadn’t trusted anyone I’d dated before — not with my bipolar, but with what my bipolar actually means — I’d trusted him with my vulnerability. And I believe that that became the foundation of the trust and intimacy that we came to build our relationship on. My partner’s understanding and respect was paramount to this, but what I realise now is that his understanding and respect was a reaction to the way I told him.

I have developed gallows humour as a coping strategy to help me cope with the darkness in my mind and, although I do believe that finding the humour in your darkness demystifies and disempowers it, if you get into the habit of constantly turning your pain into a joke, no-one will take it seriously, even when you need them to.