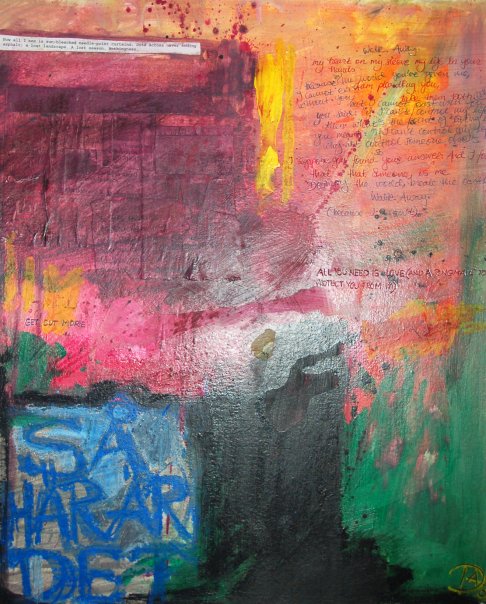 I’m sitting here with some hours to kill before meeting with Teater Fenestra to discuss the set décor problem, watching some old YouTube clips with Fredrik and Filip and feeling quite nostalgic. Then Anja sent me an email just now that I replied to as well and Nostalgia got some unexpected company, so now we’re all swilling coffee together, Nostalgia, Sentimentality and I.

But that wasn’t the topic I had in mind for this post, at all. Sorry, I get easily side-tracked when I’m under stimulated. I’ve been thinking about filmmaking and how it’s as frustrating as it’s interesting how the process goes.

On the one hand, even though I love being on set, I live the energy and the adrenalin and the creative on-your-toes way of working, it’s just really the tip of the iceberg that is the filmmaking process and as exciting as it is, most of my work and what I love about making a film happens in the preparations for that. It’s ideas and writing and re-writing (and re-writing and re-writing) and brain-storming and story boarding and location scouting and casting and obsessively visiting all he second hand shops in Stockholm looking for props and costumes and mulling over what particular type of bedside lamp this character would have (regardless of there actually being a bedroom scene in the film), etc etc…

So in a way pre-production is my favourite part of the process, but it’s also my least favourite because it’s not entirely in my hands. I can mull over ideas and storyboard and re-write the script as much as I want, but film is a collective process. It doesn’t matter how much of an auteur you are, film is still the creative equivalent of a team sport. And that frustrates the Hell out of me.

Even when you manage to come across people to collaborate with that are as quick and speak the same language as you, there are still outer circumstances that you are dependent on, such as grants, and the whole pre-production is littered with waiting periods. Waiting to hear back from consultants, potential sponsors, actors and crew members. Which makes pre-production a slow and unpredictable process that continuously slows down or pauses entirely, or takes a detour or a u-turn, all of which are out of your control. It’s the tempo that I find most frustrating. I feel like I’m constantly treading water.

But, incidentally, something that I find helps with that is having several projects on the go at the same time. But it’s obviously a roulette game juggling them all. But so far I haven’t come up with a better alternative. Real life is obviously not an option.