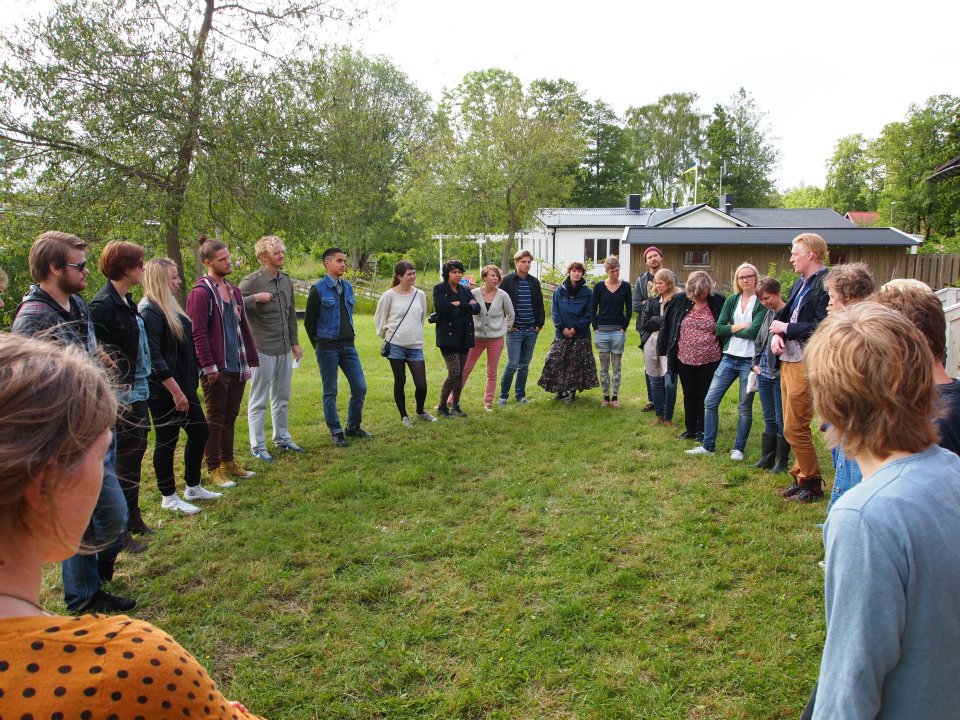 I left a grey and rainy Stockholm behind and got on the ferry bus, then the ferry over to Gotland where I met up with the rest of the group of participants and organisers on the dock. There were some haphazard greetings amidst the rain and confusion, then people started filing away into different cars and heading to Fårö and the cabin village that would be our home for the week. I got a lift from Sandra, a local filmmaker who does mostly music video work since moving to Gotland, along with Emma, Gabriela and Tage, all from different parts of the country. The four of us, joined by a guy called Jonathan, ended up sharing a cabin together. The rest of the group were in adjacent cabins and the sea was a mere stone throw away, obviously the first thing I went to check out — felt like coming home, as always — and after everyone had somewhat settled in, we all had dinner together outside and proper introductions were made. Although not in the taking-turns-holding-a-speech way I was dreading, but completely casual, in-between “pass me the sallad” and squeezing together on the benches to make room for each other.

The first item on the program’s agenda took place already that night, and it was the screening of a Danish film called “Labrador (Out of bounds)”, which started out slow but really picked up about halfway through I thought, as I was gradually sucked into the world and psyche of the female character (played quite brilliantly by Stephanie Leon) and through her, I was also susceptible to the lull of the landscape and enviroment, something I’d only registered intellectually in the first half of the film and thus “seen through”. My aquaintances and colleagues from Stockholm, Johanna and Valentina, who were also in the program, told me a couple of days later as we drove to see the rauks that they’d hated the film and we ended up discussing it, focusing mainly on the female character and her journey through-out the film because that was my reason for liking it and that was something that they could relate to, although some of my interpretations they hadn’t made themselves and although they agreed with me about her and her journey being interesting, they both felt that she wasn’t given nearly enough room or screen time compared to the two men, which I completely agree with. Although I did like the actor who played the part of her boyfriend, Carsten Bjørnlund, I thought he was brilliant as well, the character itself was perhaps given quite a bit more focus than necessary, since he was given more focus than her, same goes for the character of her father, played similarily un-brilliantly by Swedish actor Jakob Eklund. It was a good discussion that started in the car that day, though and for that alone I think the film gets a kudos, right?

On the first morning we all went and got our bikes that the program had hired for us during our stay and I hadn’t been on a bike since mine was stolen in 2004, so it was quite exhilirating to travel across the idyllic landscape of Fårö on one, I tell you. We all gathered in the small theatre, set up in a 50s barn, and four of us showed a sample of our work. I showed “Varma Mackor (Toast)” and got amazing response (everyone seemed to think the acting was great as well, so that felt like a small victory. Especially after that phone meeting I had with a film consult who blurted out that he thought the acting was unsteady and mostly bad when cornered into thinking on his feet and give some form of feedback despite, I suspect, not having actually seen it.)

The afternoon was dedicated more deliberately to Ingmar Bergman himself. First there was a conversation with Luc and Jean-Pierre Dardenne that I felt was rather slow, but that could have been due to the constant hold-up of translation between French and Swedish, but someone suggested it had a lot to do with the questions being asked as well. After the conversation with them, the brothers briefly explained their choice of Bergman film to introduce and then introduced it. It was “Nära livet (So close to life)”, one of Bergman’s less known dramas, from 1958, about motherhood. After the screening we had a discussion about it with psychologist and psychoanalyst Ylva Axelsson and her husband Tomas Axelsson, theologian and founder of Existential Film Festival.

We spent all of the second morning watching more of people’s work and it was both inspiring and awe-inspiring, which is saying something since usually I’m not easily impressed, but I really was.A few films may have stood out more than others, but that was exclusively due to personal taste and the mood of the day, not at all due to a higher standard or something like that. Also, what I think contributed a lot to my being so overwhelmed by impression and inspiration was that the quality of work barely varied, but genre and story/subject (it was a mix of fiction and documentary, and in one awesome case the mix of both) did. A personal treat for me, was to finally get to see “Århundradets brott (Damaged ones)”, Johanna’s film that I worked on last summer, as well as Valentina’s film “Séptimo (Beast)” (which I had no part in what-so-ever but been wanting to see for ages anyway.)

Later that afternoon was my personal high light of the Bergman week activities, namely the Suzanne Osten lecture in which she talked about herself, her mother Gerd Osten and Ingmar Bergman. I couldn’t even begin to summarize the lecture or explain why I was so inspired by it and Suzanne herself, all I can say is that she is a force of nature. And I think you could actually argue that she has almost single-handedly paved the way for myself and all the other female directors of my generation in this country. That alone entitles her to a patron sainthood in the film sector of the sisterhood, wouldn’t you say?

That night we were treated (?) to an exclusive sneak peek at a film called “Hassel – privatspanarna”, which is a sort of anti-sequel to the Swedish crimetime franchise Hassel that was big in the 80s and came to spawn the various franchises of today (Beck, Wallander, Van Veeteren, etc…) and — as a full-on, satirical, comedic mockumentary a lá The Office, it was brilliant. I laughed so hard. Then followed a confused Q&A with the filmmaker Måns Månsson who sort of suggested that this wasn’t a full-on comedy. I think. He was rather vague. In fact, he refused to say which genre he’d aimed for at all. Or which target audience. This guy has a background in art school rather than film school and it is possible that he believes he’s made a film that blurs the lines between between genres altogether, and between fiction and reality, between art film and I don’t know regular film (He later appeared as a panelist on the Bergman-week item “Breaking up reality: a conversation”, so this is looking quite likely.) and in that case, I’d say he’s failed and the film is a disaster. But as parody/comedy — pure genius.

Speaking of “Breaking up reality”, that was a huge disappointment. Aforementioned Måns Månsson, quite interesting artist Markus Öhrn and quite pretentious docu filmmaker turned stage director Marcus Lindéen, somehow representing the Alternative Guys of Swedish Film, sat around backslapping each other and themselves for an hour. Öhrn did actually try to invite the other two in actual discussion a couple of times, but they merely acknowledged his attempts with a “yep” and then moved on to another narcissistic monologue. It was quite tedious.

There were a couple of more items on the agenda, but I think those items not on the agenda affected me more. Such as lunching at the unreal, 50s themed crêperie. Swimming in the sea. Cycling across Fårö during sunset. Staying up til one in the morning discussing the theory of relativity on the beach instead of working on the actual assignment with my assigned partner, Olof. Even visiting Ingmar Bergman’s grave, however touristy. And definitely, my very last moment spent on Fårö and on Gotland, talking to Sandra in the car as she gave me a lift to the ferry, as I had to leave a day early because of Anja’s shoot.

I have to say though that I left Fårö feeling both energised and inspired, but that was more to do with the time spent getting from A to B, it was the in-between times spent with my fellow program participants, discussing the various lectures or screenings, or simply hanging out without discussing film at all, and just the fact that this is a first for me makes it all the more amazing. I have never before exprienced such a genuine atmosphere in a film industry context. In my experience the Swedish film industry is all about prestige and filled with competitive, jaundiced and (surprisingly) often uncreative people. During this week, for the first time ever, I felt the opposite was true.

Checking out the beach with Emma and Gabriela the first evening