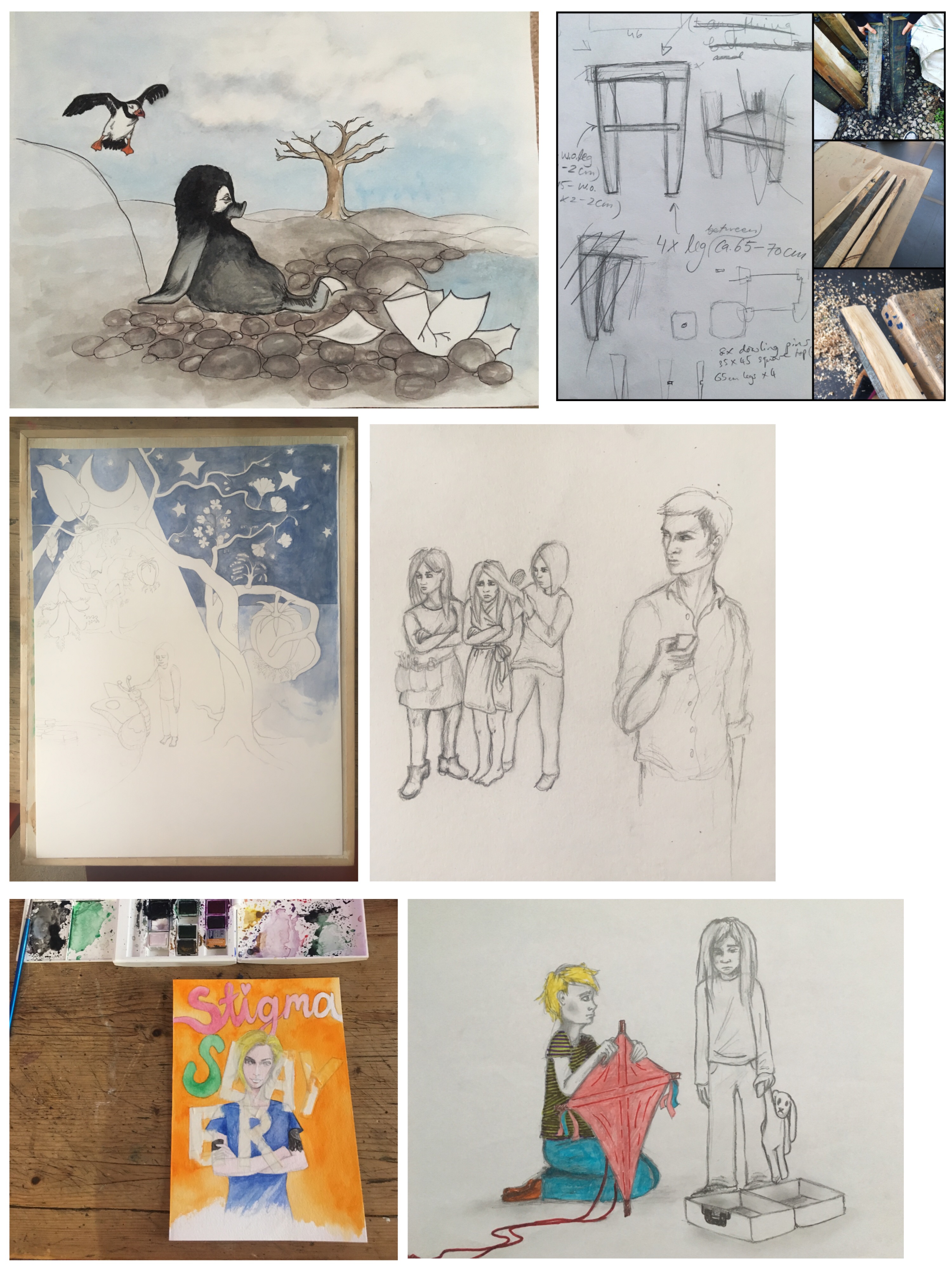 It’s become a running joke between my partner and myself, the fact that I keep having new ideas all the time but never finish anything.

I’ve always had lots of ideas, for as long as I can remember, that’s just how my brain is wired and I do love those early stages as the idea “plumps down” in my mind and starts to develop; that’s when I feel the most inspired and alive–if I can also find someone who will brainstorm with me during this stage, then that’s as close as I get to euphoric. Sadly, that rarely happens (probably because I get too excited and intense, think and talk too quickly and even flit back and forth in my thought processes, making it impossible to keep up with me…)

I know that I’ve always had the tendency to move on to new projects before I’ve fully finished my previous one, for exactly this reason. The beginning of the creative process, when you’re discovering, developing and nurturing a new idea, is the most fun and inspiring part, and the fun gradually declines after that, replaced by actual hard work and frustration, so it does make sense that, when an exciting new idea “pops in”, to want to jump ship. But what I’ve been experiencing for the past two years, and all the time that my partner has known me, is a lot more extreme. Whereas before I would pump out hundreds of pages of a story, whether it be a novel or screenplay, and get as far as the last act before I lost interest or got distracted by something else, or even finish the first draft but then abandon the editing process and start a new story, now I’m struggling to through the first page…

My partner, who has never known me to finish anything and simply thinks this is how I am, jokes good-naturedly about it with an affectionate smile and I smile back, but part of my worries that he thinks I’m actually incapable of finishing anything and never will and won’t ever get anywhere in my creative career. The rest of me worries that I now am incapable of finishing anything, never will finish anything ever again and that my creative career has ended before it barely even had a chance to begin.

Rationally, I know that I am capable — of a lot of things, including finishing projects in an array of areas, because I have before — I have written, directed and finished five short films (not counting student films); I have finished the seventh draft of a feature film screenplay and pitched it to some ‘big deal people’ (and the only negative feedback I received was that the story was too edgy, but everything else about the script was really good), I have written and edited several poems and a short story that have been published, I have finished several drafts of a novel manuscript and had a publisher interested for a while, and I may not have finished my art degree but I have had one unconventional ‘feelings art’ painting exhibited and sold another one. So yes, I know that I can finish what I start, sometimes.

But there’s no denying that it’s been a long time since I finished anything now. And I’m not just talking about screenplay and novel drafts now, I’m talking about anything. The size and complexity of the project doesn’t matter anymore. It could be a handmade greeting card, a bedside table, a book (as a reader, I mean) or even a load of laundry. I just struggle to finish anything I start lately. I think part of it is that I’m just generally more scattered and easily distracted, but I also think I might be subconsciously sabotaging for myself, because deep down I’m chasing that feeling… The inspiration and excitement of starting something new.

When it comes to creative work-related projects, I think there are several other factors at play as well. For one, I seem to get new ideas more frequently now (at least one a day, either an idea for a major change in an existing project or an idea for brand new project), so I’m having to combat that distraction and practise my barely-existent self-discipline a lot more nowadays. Another factor is that I also flit between areas/mediums more frequently. In the past I might have been focused on my painting for weeks or months, then writing for a year, then something else, whereas now I flit between poetry, scriptwriting, prose, abstract art, children’s book illustrations, DIY projects and improvising in the kitchen, all in the same day.

I know that creativity and drive (and forgetting to self care because of it) are just as symptomatic of bipolar disorder as being scatter-brained and struggling to stay focused, but I don’t believe that necessarily means that I’m doomed to a life full of unfinished projects and half-sorted laundry; I am determined to harness my creativity and drive of my bipolar brain despite the other parts of the same brain that distract me or make me self-doubt and overthink. If there are strategies for coping with anxiety and self-harm urges, there must be strategies for focusing on one thing at a time, for a long enough time, that you actually make some progress every time you sit down to work on it…

Well, consider this my mission statement! I am going to finish a project before the end of July!

(Now, my brain is going: “YASSSS I AM GOING TO START AND FINISH THE FIRST DRAFT OF THIS NOVEL I JUST HAD AN IDEA FOR AND THEN I AM GOING TO DESIGN, SKETCH, DRAW and COLOUR THE FRONT COVER ART, AND THEN–!” But I am going to ignore it and be a little smarter than it for once. Although I have finished the first draft of a novel in a month once, I know I don’t have the hypomanic energy level, the focus or the lifestyle to accomplish that right now. So that would be setting myself up for failure. So instead I am going to finish something smaller; a short story, a large illustration or a children’s book illustration dummy, or something like that…)

One thought on ““One day you’ll finish project””