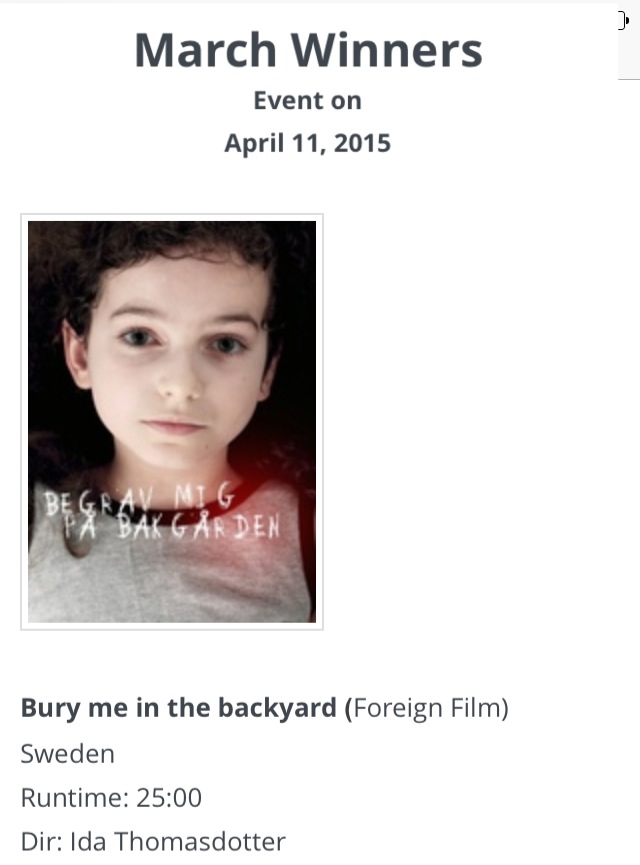 So the week in London was a rollercoaster! inHOUSE festival was definitely a great experience and if nothing else, I got really curious about living in a warehouse! What it is, is all these abandoned warehouses in the North of London that a bunch of creative people have moved into and they both work and live there together like a large creative collective! I’d never heard about it until Bury me in the backyard got chosen to be screened at their festival, and I’m really glad I did because it was a really cool experience! I brought my dad to London with me, because neither Anna nor Tove could go with me and my dad has never been to London, so we killed two birds with one stone and did some touristy stuff as well. On our second night, the night of the festival launch, we met two artists who live and work in the warehouses, who showed us around and then took us out to dinner in an authentic Turkisk restaurant. I hinted that I would love to live in one of the warehouses, so we’ll see what becomes of that…

Bury me in the backyard has now been selected to screen at two festivals, inHOUSE and Circolo del Cinema “Sogni – Antonio Ricci” in Ravenna, Italy and it’s also won March’s selection Best Foreign short film at Los Angeles Independent Film Festival Awards. And a lovely girl named Carla Buckley has written the most lovely review of it for Watch This Space Film Magazine that you can read here: http://watchthisspacefilmmagazine.com/2015/05/05/bury-me-in-the-backyard-2014-review/

But back to London! Besides the festival and the usual sights, my dad and I also went and saw Gypsy at the Savoy and besides the screening of my shortfilm, that was definitely the highlight of the trip–I got to see one of my favourite actors Imelda Staunton live!–and just walking around in the West End was so inspiring. Imagine being able to call that your office!

As soon as we got back to Sweden, I went straight to a location for the second music video that we’re shooting with EFTERTEXT gävleborg 15 to help the girls make the script breakdown and shooting schedule, and then we shot the video the very next day. It was a hectic and chaotic shoot, but we got all the scenes in the end and the girls were happy! Then we had two full days of seminars and screenings at the Swedish Film Institute, and then I’ve been editing non-stop until this morning! Lillstrumpa & Systerdyster, my third shortfilm, that’s supposed to be completely finished on the 15th, needed to be edited completely in order for Isabel to colour grade it and the sound technician to mix it. Also, Simon is doing the final touches on his music and he needed to see the finished film in order to do that. But, finally, things are coming together! I can’t believe it’s almost finished! A year ago we’d finished casting this film and I was preparing the shoot on location in my home village Ljusne… I was stressed about it then too! And now it’s almost finished!

I also got another rejection on my novel manuscript, and once again the feedback I got was that it was extremely well-written but quite dark and they weren’t sure they’d be able to sell it… I’m starting to seriously consider starting my own publishing company!